A yearly spring cleanup sponsored by the New Mexico Jewish Historical Society and the Montefiore Cemetery Association brings participants from Jewish communities around the state to this historic cemetery. The annual cleanup serves not only to keep the cemetery in good condition, but to foster awareness of Jewish history in northern New Mexico and ensure the continuity of the Jewish presence in Las Vegas. 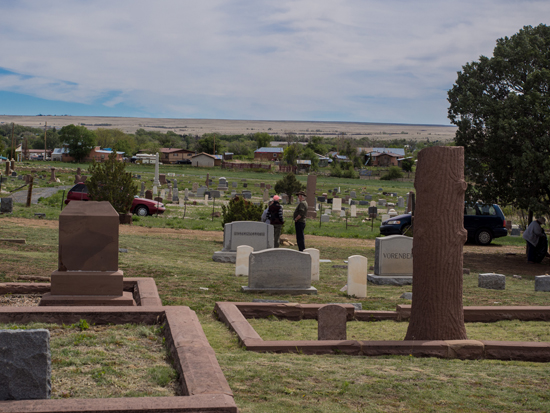 In 1881 the large Jewish Community of Las Vegas, New Mexico, established the Montefiore cemetery just west of town, adjacent to the Masonic cemetery. This was one of the first Jewish cemeteries west of the Mississippi; the other large one was in San Francisco. The Jewish citizens of Las Vegas were quite involved in civic affairs. Many were Masons and Woodsmen. Several are buried in the Masonic Cemetery, which existed before the Montefiore Cemetery was created. Some headstones in the Montefiore Cemetery are in the style of the fraternal organizations that Jewish members belonged to.

The cemetery headstones reflect the vibrant Jewish history of Las Vegas and trace the migration of many pioneer merchants and other families from Europe. Although there are stones marking the death of infants, a majority of the older population passed away in the 1930s.

Marvin Taichert, son of Las Vegas businessman Milton Taichert, founded the Montefiore Cemetery Association in the 1980s to care for and clean the cemetery as a mitzvah for his family. He began an annual cleanup, complete with picnic and talk, which continues to the present day. Marvin passed away in 2002.

Click here for a map and directions to the cemetery.